A compelling, survival-focused city builder that loses momentum once stability is achieved

The survival genre seems to be gaining significant momentum with games like DayZ, Don't Starve and Rust offering up different takes on the necessity to remain fed, clothed and warm under various circumstances. Banished is another game focused on survival, but it comes from a city-building background, sharing traits with the likes of SimCity and Anno. This means that instead of keeping a single character alive, you must attempt to oversee the survival of an entire community as it grows from a small gathering of outcasts into a burgeoning frontier town.

After a dry but informative tutorial, you can select a variety of starting conditions, after which point you will be plopped into the middle of a randomly generated map with a handful of people, some potatoes and some basic supplies. From here you must establish a town which will facilitate the survival and expansion of this initial party. At first, there are many pressing needs which demand your attention. The townspeople have no place to live, so you must construct some houses. Your initial stash of supplies will quickly run out, so you must go out and harvest more wood, stone and iron which form the backbone of your early municipality. Your supply of potatoes will quickly start to run out, so you must determine the most effective way to start extracting food from the land. 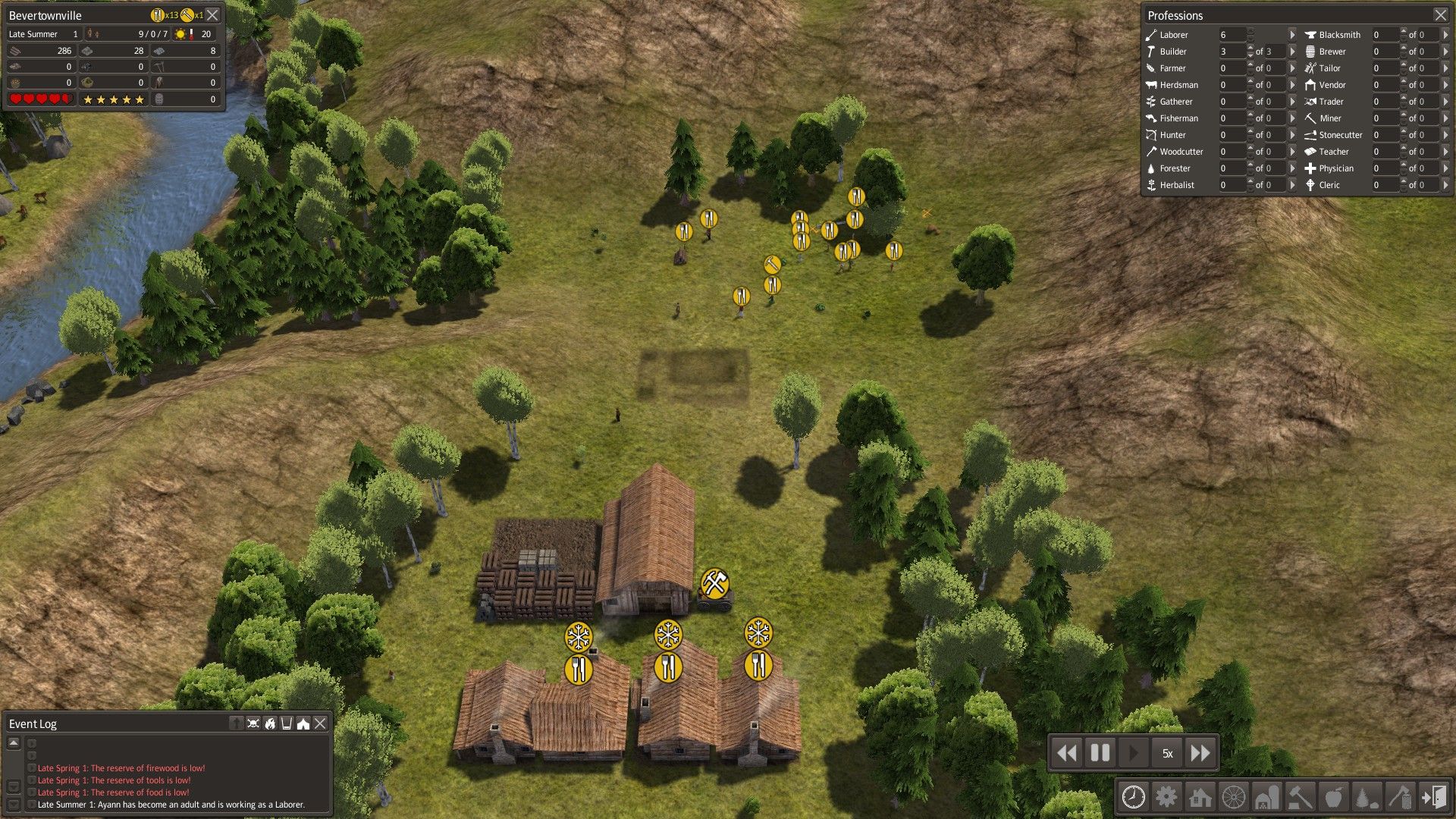 Just when you think you have things under control with a steady supply of resources and a fishing hut fully staffed at a nearby river, winter will set in, and your people will start to freeze. You then need to worry about building a wood-cutting station that will supply firewood. However you only have so many people, so you are forced to divert some fishermen to cutting down trees and producing firewood, which results in a food shortage. This shortage will then be exacerbated by the fact that several of your frontiersmen and women have copulated and produced a bevy of ravenous progeny which drain your reserves of food without helping out in any way whatsoever. The first few years of a village in Banished will see you stretched thin, constantly moving your small population between equally pressing tasks.

My first town only lasted three years as an early snowfall caught me without any firewood, resulting in my entire population freezing to death before I could avert the crisis. My second town lasted a year longer, but I expanded too quickly, discovering that building too many houses seemed to encourage the fantastical reproductive abilities of my people, resulting in a massive brood of children who saw my population slowly starve to death. My third town however was located next to a river and a huge deposit of stone and iron, a resource advantage which saw my town through the initial challenge and into a state of thriving stability. However once I reached this point, with a population of around one hundred and fifty with a fully sustainable resource economy complete with a mine, quarry and several forestry huts, the game stopped being about survival, and I stopped caring about the town. 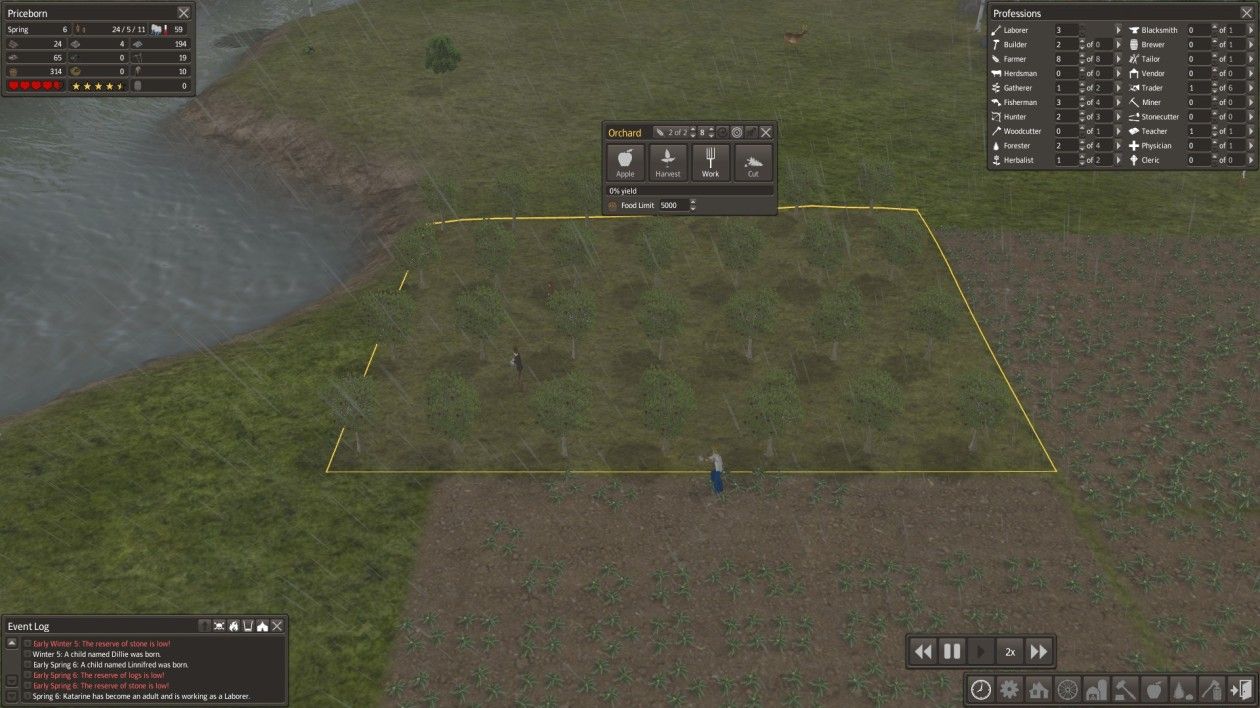 Orchards take a few years to yield any fruit

Early on you are constantly having to worry about several things as once, but once you have a large enough population to simultaneously produce food, building supplies, firewood and the requisite tools and clothing, you no longer have anything pressing to strive for. The game turns into a pleasant village builder, where you simply oversee the gradual expansion of your town. Late game structures exist, such as a trading post which allows you to barter for seeds and livestock, but the lack of urgency compared to the early years makes it difficult to remain invested in a more mature town. Disasters might strike, but they are infrequent and you have plenty of time to build structures that are clearly meant to counter them, such as hospitals for disease outbreaks or wells for fires. A harsh winter might result in a poor harvest which could see you losing a few people to starvation, but after the starting period, I never felt my town was truly in jeopardy.

In practice, the game is quite simple to play. A clean, customizable user interface shows you the pertinent numbers that signify how much of every item and resource you have stockpiled. Another window shows you the distribution of your labour force; you can alter this as you see fit to overcome various shortages. Another window announces events such as citizens being born, becoming old enough to work, deaths and supply shortages. Time can be sped up and slowed down as you see fit. Everything is intuitive, responsive and works as intended, an impressive feat given the game was developed by a single person. 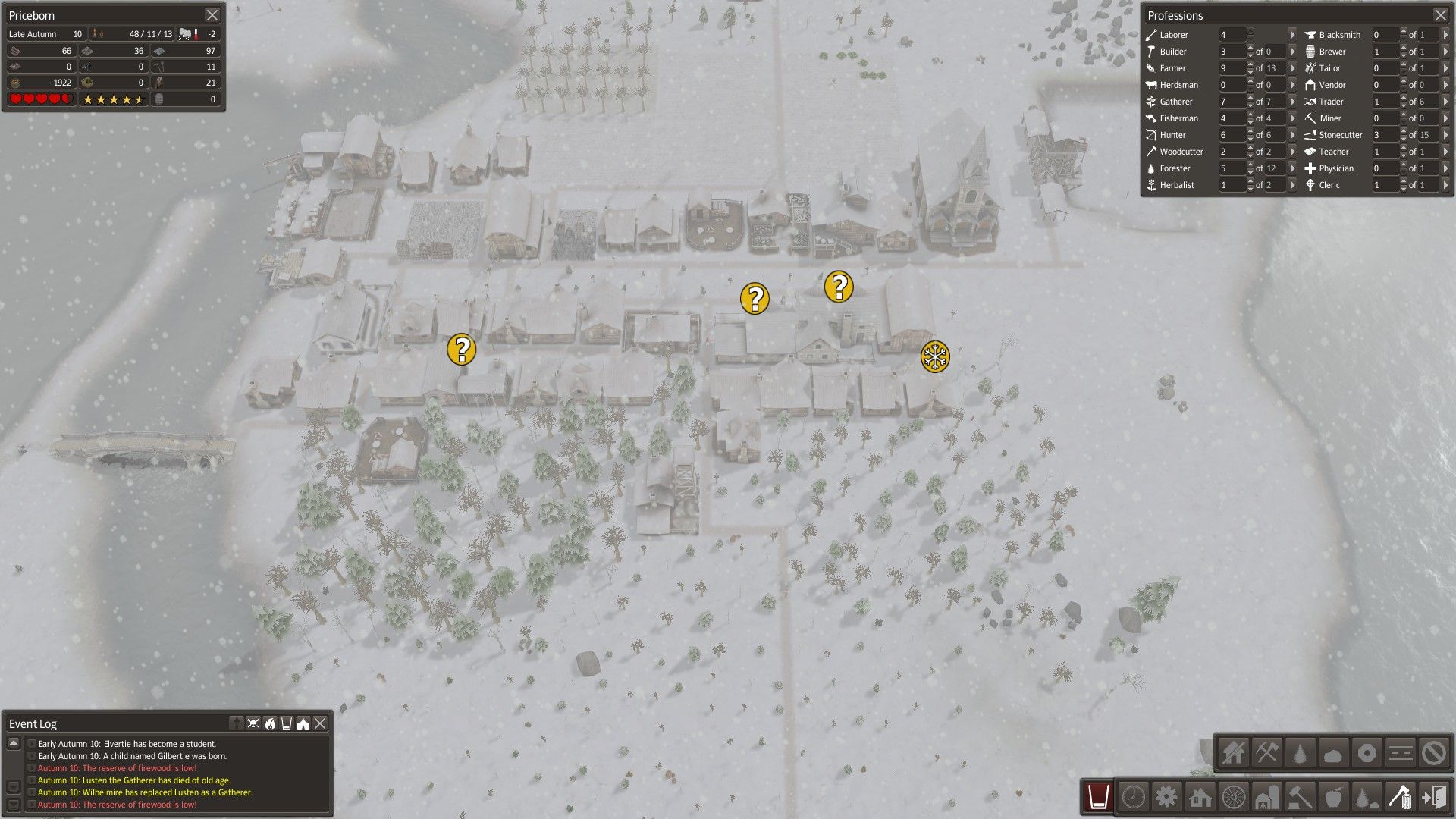 Long winters will put your village to the test

The only exception to the polish was the bizarre behaviour of workers at pivotal moments in a town's development. Two of my villages failed simply because the builders decided to wander around in a field instead of working on the gatherers hut and blacksmith that I so crucially needed. Whether this is by sadistic design or was a glitch with the AI I cannot say, but you would think the entire population of the town starving or wandering around without tools would motivate the builders to work a bit bloody faster. In another instance, a herd of deer stood beside my hunter's cabin while the hunters wandered around starving in the village, waiting for the deer to move far away before returning to work. The AI seem to work on their own silly schedule, which lead to moments of me screaming at the tiny men and women to get back to work like a crazed sweatshop foreman.

After I discovered a winning formula for village building on the default settings, I turned the starting conditions to hard, meaning I started with less food and no building supplies; I turned the climate to harsh, resulting in colder, longer winters, and opted to build my village in the mountains instead of the valleys. This proved to increase the initial challenge even further; my first attempt saw most of my population starve to death before I managed to build a simple gathering hut to feed them (thanks to those damn lazy workers mentioned above). However, once I managed to overcome the initial challenge, the late-game stages once again fell into a comfortable, non-threatening rhythm of summers spent farming and winters building new structures and extracting resources. Once you reach this point, unless you shoot for Steam achievements which encourage large populations and huge stockpiles of resources, there is limited motivation to continue expanding your village beyond the simple joys of crafting an aesthetically pleasing frontier town. 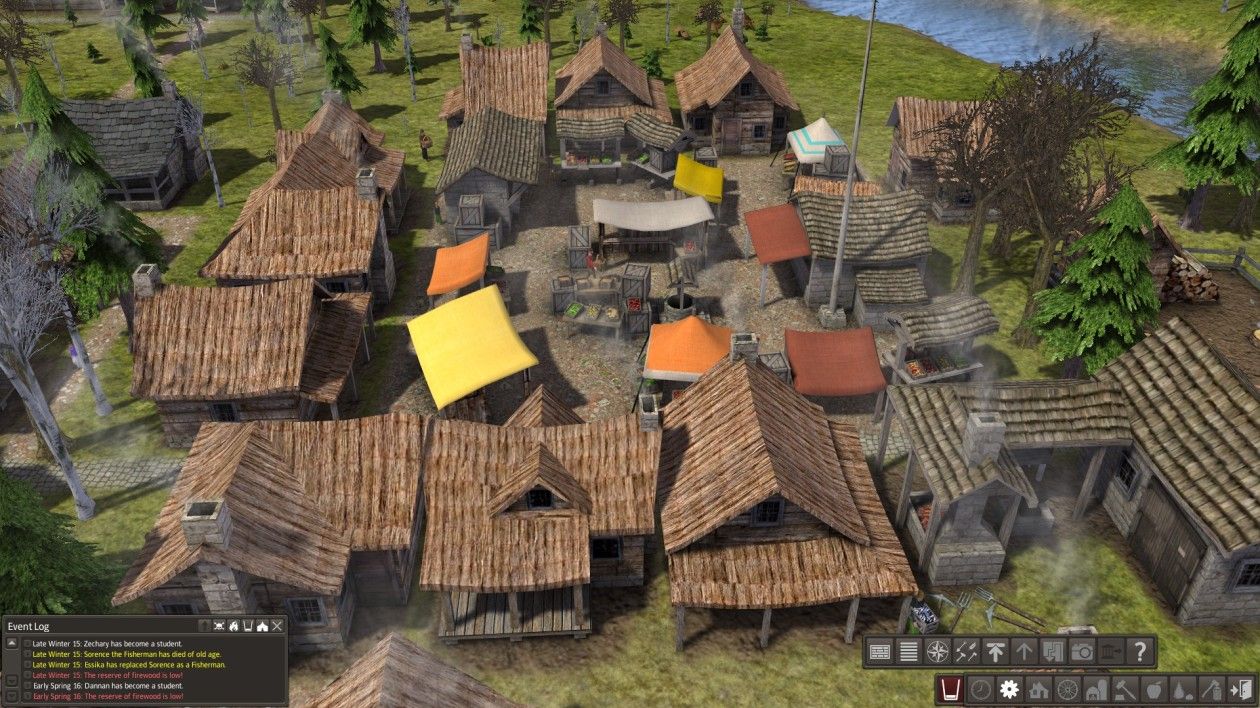 Markets serve as distribution centres for your ravenous populace

Creating an aesthetically pleasing town is surprisingly easy thanks to the subtle but attractive visuals. Houses that fill in the gaps of a town come in several shapes and sizes, with smoke billowing from the chimneys when they are properly stocked with firewood, giving settlements a quaint, cozy appearance. The citizens will go about their business, chopping down trees, mining rocks and buildings structures. Trees slowly grow around foresters huts, and packs of deer roam around the periphery of your town. The trees change color in the fall and snow blankets the ground in the winter. This is all set to a pleasant sound track of industrious stringed instruments which fits the setting perfectly.

While each Banished campaign starts off as a tense survival management trial and gradually morphs into a pleasant frontier-themed city building tycoon, it is hard to know which group of players is being targeted. I found myself riveted to the game for the first few hours as I struggled to see a series of villages through their first few winters. However I started to lose interest in the game once the initial hurdles had been overcome, with the occasional disasters being infrequent enough to be of limited concern. If you enjoy city building games and don't mind a challenging start, the reasonable asking price will likely be well worth it. However if you are strictly interested in building giant cities with strong economies, or want a straight survival-style game, you might find yourself losing interest in Banished after several hours.

Our ratings for Banished on PC out of 100 (Ratings FAQ)
Presentation
80
Banished is easy on the eyes and has a pleasant soundtrack to accompany your endeavors.
Gameplay
70
Every building is useful, and figuring out how manage your town is made easy thanks to an intuitive UI. You will ultimately spend a lot of time watching and waiting however.
Single Player
73
Randomized maps and different climates and starting conditions make for great replayability, although things slow down if you survive the first several years.
Multiplayer
NR
None
Performance
(Show PC Specs)
CPU: Intel i5-2500k @ 3.3ghz
GPU: EVGA GTX 670 FTW 2GB
RAM: 8GB DDR3
OS: Windows 7 Ultimate 64 bit

90
The game runs smoothly and has a tiny install size. Some AI behaviours are a bit odd at times though.
Overall
75
A polished and enjoyable but somewhat aimless survival focused city-builder that slowly loses its appeal once you figure out how to survive the initial starting-up period. 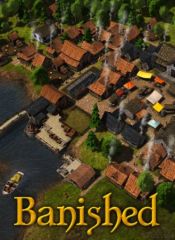 Our Review of Banished
75%
Good
The Verdict:
"A compelling, survival-focused city builder that loses momentum once stability is achieved"
Game Ranking
Banished is ranked #757 out of 1690 total reviewed games. It is ranked #57 out of 152 games reviewed in 2014.
756. Dragon Ball Z: Battle of Z
Xbox 360
757. Banished