So many developers spend time trying to perfect their gameplay mechanics to empower players. Often times, sloppy mechanics are the very crux of a bad game. So how does one go about playing a title where the mechanics are intentionally difficult, intentionally sloppy? Octodad: Deadliest Catch gives the player an unwieldy main character who is - surprise, surprise - an octopus, pretending to be a human and making a mess everywhere he goes. Deadliest Catch is a sequel to developer Young Horses’ first outing, and a significantly larger endeavor. The premise of Octodad is so charming that it instantly sucks you in. As most games are strict realms of stern rules, painfully wincing when their games break, Octodad revels in its own mess. At least it does so at first, but the developers do not seem to know how to take their core idea and turn it into a significant experience.

Octodad is all about its mechanics, intentionally taking power away from the player by giving them a main character that flails about. Maneuvering Octodad is a full-controller experience. The thumbsticks control the arms, and right bumper can be used you pick things up using the suckers on Octodad’s tentacles. This is a fairly intuitive system, and it is easy to discern what you are grabbing. The more non-traditional aspect of the control scheme is walking, as players must use the left/right trigger button to control Octodad’s respective legs. While holding the trigger buttons to determine height, you also can aim the legs using the thumbsticks. Some actions, such as walking, can be learned quickly, but others will always feel obtuse. 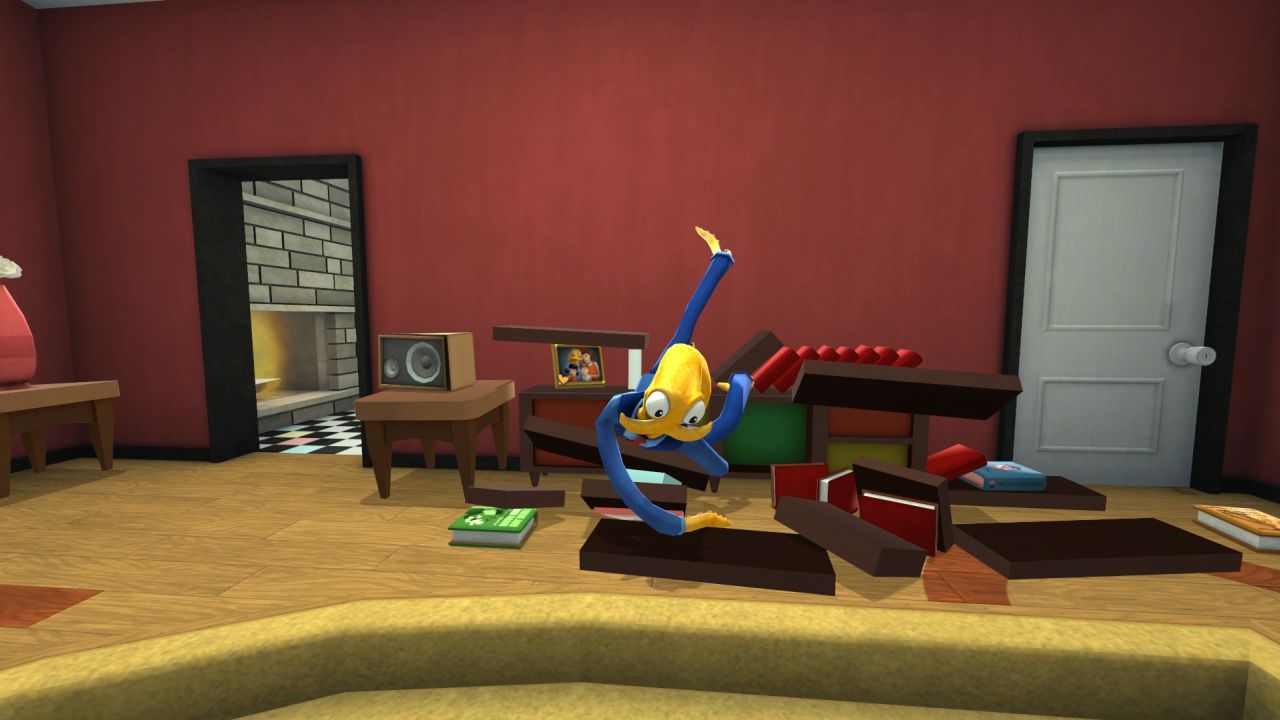 When Octodad is at its best, it is beautifully organic. Players spend the beginning of the game wandering around environments, doing everyday things. You wake up in the morning and help make breakfast, mow the lawn, things that the everyman dad does. The only difference being you are an octopus, and due to your loose tentacles and slovenly walk, you tend to wreck everything. Whether you are bringing milk to your daughter while spilling it, or knocking over the apples in the produce section, creating general destruction is a good time. The objectives of each level are spread out enough that you don’t feel like you are being shoved along, but simply being provided cues to create smart comedic moments.

You can be as straightforward with Octodad as you want, playing by the rules the world sets up for you, but when Octodad allows you to think outside the box is when it is at its best. Playing basketball, I tried messing around with the physics of the game, but eventually I used Octodad’s length to sneak in a couple slam dunks. It is this creativity that makes Octodad feels smarter than its premise might suggest. When you get tired of breaking things, the game offers collectibles to find and secrets to uncover. These are nice touches to a game that threatens to become dull at a couple of points.

The problem that Octodad runs into is the developers feeling the need to add more depth to Deadliest Catch, adding a hamfisted narrative to make sure there is a greater goal to the game. I’ll get into the writing later, but this narrative forces the game into stealth scenarios that steal away from the humor Deadliest Catch so organically creates in the front half of the game. It’s funny to knock things over in a kitchen or bowl through a grocery store display. What is not funny is trying to use these clunky mechanics is slip past fishermen and marine biologists. Octodad is an intentionally clunky character, so it is hard to understand why the developers feel the need to punish players with the game’s obtuse nature. Too often the game is asking you to conform to regular level design, instead of embracing what it naturally has in front of it. 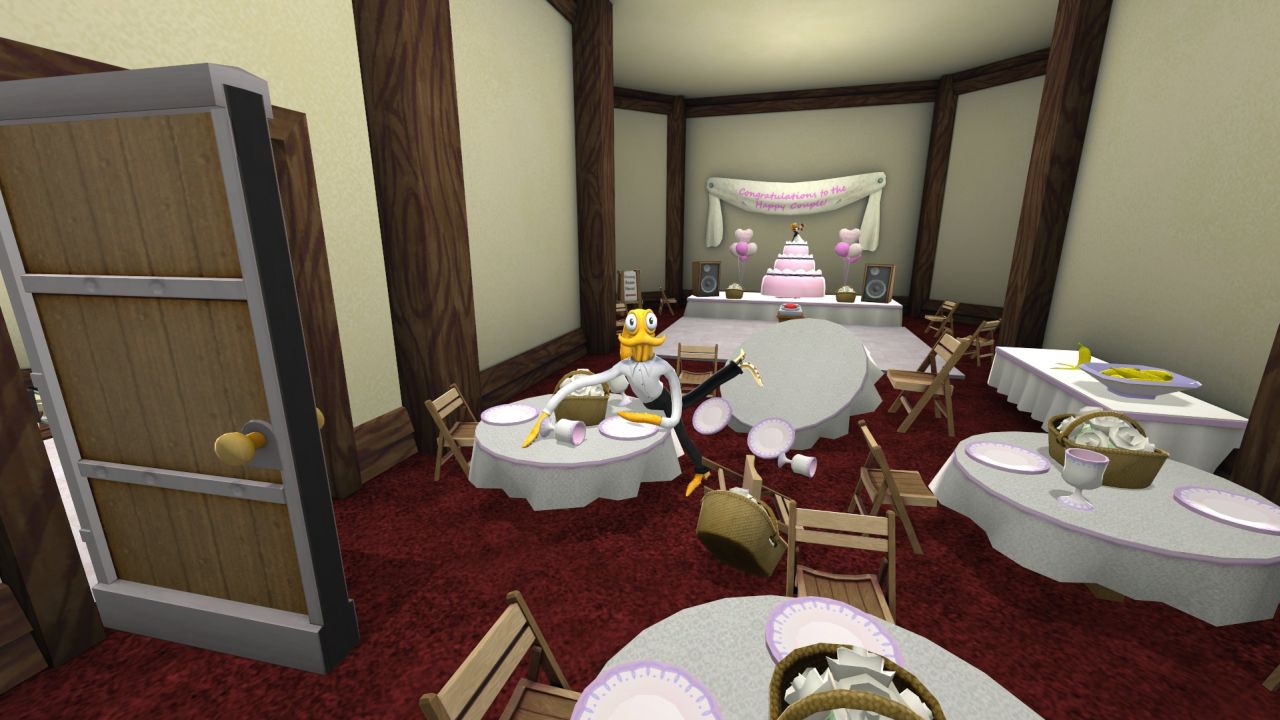 Even in the earlier levels you have to be careful, as any human observers who notice you knock things over will add to a meter that monitors your disguise. If the meter fills up, the level will end as you octopus identity will have been discovered. It prevents you from being able to go crazy and is rather forgiving early on, but soon certain characters are added that can spot your disguise immediately, forcing you to avoid their detection completely. There are also a couple chase sequences, putting the game's difficult controls front and center. It all adds more frustration as the game tries to frame itself in a more traditional light, the only problem is that Deadliest Catch is anything but traditional.

The organic humor of Octodad: Deadliest Catch is backed up by a pretty smart script. The family that Octodad has created includes some strong staple characters, including Octodad’s wife, an investigative reporter who is missing the obvious fact her husband is an octopus, and his daughter who consistently squeaks out adorably funny lines. Early in the game, when you are busy causing mischief and clowning around, the dialogue is a nice touch, adding some chuckles to the experience. However, as the game starts to funnel you through its narrative, you are spending too much time being frustrated to catch some of the game’s better jokes.

It’s hard to establish a beginning, middle, and end to Octodad: Deadliest Catch, as it is more a tale of two halves. The first half is a few scenarios that set objectives for players to complete before moving on to somewhere else. About halfway through, the antagonist, a menacing chef, becomes a more central - but uninteresting - character, who pushes the rest of the story forward. There is an exposition level to give Octodad some context, and a fiery finale, but it’s all by the numbers, forcing players to go from Point A to Point B without being detected. The linear structure betrays the organic fun, failing to capitalize on what made the game so charming in the first place. 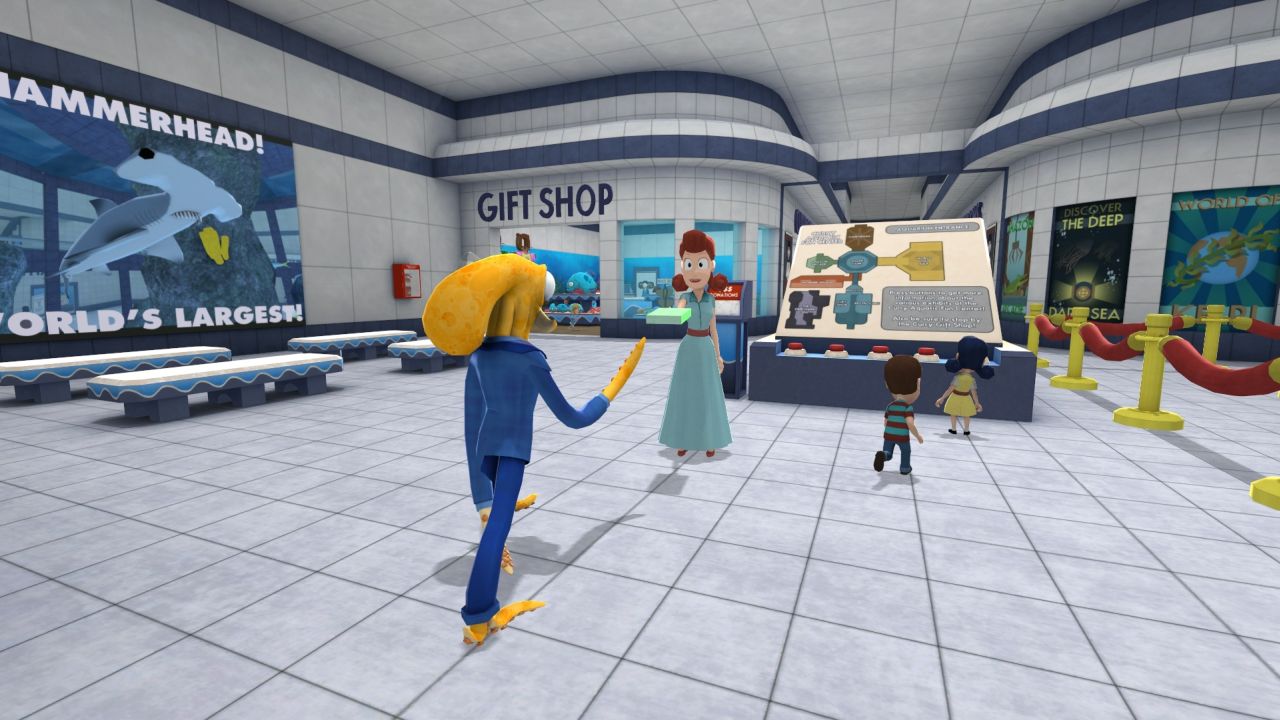 You can stretch Octodad into a 3-4 hour adventure if you milk the experience, but you are more likely to spend about 2 hours with the story. After you complete the game there are a few ways to still enjoy yourself. You can go back and free-play the levels, getting an opportunity to really enjoy certain levels you were pushed through before, or revisit some early favorites. The game also supports Steam Workshop, opening up future opportunities for cool levels or mods. Though, as of yet, there doesn’t seem to be much community support. There is potential for more fun with Octodad beyond the first few hours, but not much.

Octodad is not pretty, and definitely won’t turn any heads with its graphics, but it is clearly not the meant to. There are one or two points when the game’s lack of polish stands out. Nonetheless, the visual design is charming, filled with bright colors and light hearted atmosphere. The physics simulation is solid and, with some practice, you can start to get a handle on the slippery protagonist. There are also blissfully few technical issues, the game never crashed, exhibited glitches, and was impressively stable.

Octodad: Deadliest Catch is a strong premise, and its gameplay is a fun idea. Experimenting with the game’s physics and laughing at your own mistakes is a good time. Unfortunately, Young Horses is not sure what to do with the idea after the game’s first hour, so it turns to the cookie cutter gameplay design for inspiration instead of coming up with something fresh. At the core, Octodad is about a klutzy father who is trying to keep up with a brilliant family, a relatable situation that endears the character and his faults to our hearts. Spending more time exploring Octodad’s day-to-day life is far more entertaining than sneaking through levels with all the grace of a black-out drunk Sam Fisher. Unfortunately, Octodad fails to realize its strengths, and soon turns into another linear game with clunky controls.

Our ratings for Octodad: Dadliest Catch on PC out of 100 (Ratings FAQ)
Presentation
75
The bright colors and charming aesthetic make up for some of the rough character models.
Gameplay
71
Deadliest Catch indulges in its purposefully wonky controls, it is fun when the premise and objectives are simple, but as plot moves on it becomes frustrating.
Single Player
52
There’s not much depth to Deadliest Catch. The first hour is fun, but the game quickly narrows itself to a less-than-enjoyable experience.
Multiplayer
NR
None
Performance
(Show PC Specs)
CPU: Intel Core i5-3570K
GPU: Nvidia GeForce GTX 660
RAM: 8GB
OS: Windows 10 Home

85
Despite it not being overly demanding, Deadliest Catch runs smooth with no complaints.
Overall
66
The concept of Octodad: Deadliest Catch is clever and the overall experience is good for some laughs. But it is hard to recommend a game that is fun for little over an hour. Young Horses just doesn’t seem to know what to do with their good idea. 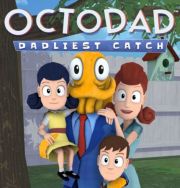